For Avnita Bir, principal of Mumbai’s prestigious CBSE-affiliated K-12 R.N. Podar School (estb. 1998), the purpose of education is “to encourage learning to learn and not learning to know”. Therefore the school’s management prides itself on providing balanced holistic education to its 2,700 students. Its strong focus on academics apart, R.N. Podar School has integrated contemporary best practices such as life skills, curriculum-complementing learning and career guidance programmes into its middle and senior school curriculums.

An economics postgraduate of the Delhi School of Economics and the Central Institute of Education, Delhi, Bir began her career as an economics teacher at the Maharani Gayatri Devi School, Jaipur in 1984. Seventeen years later, while working as a lecturer in Mumbai’s Jaihind College, she signed up as a strategy and planning executive with Renful Premier Management Services (I) Pvt. Ltd, a UK-based firm providing HR consulting and support services to corporates. “It was while working in the corporate sector that I became increasingly aware that teaching tomorrow’s citizens and leaders was my natural vocation,” says Bir, who also taught senior secondary students in Bangalore’s Mallya Aditi International School (2000-2001) and at the National Public School, Bangalore (1998-2000). It was during her tenure with Jai Hind College (2001-2003) that she was invited to take charge of the R.N. Podar School.

Since then Bir has introduced several academic and extra-curricular innovations which have earned this hitherto low- profile K-12 school golden opinions. Among them: conducting specialised skills enhancement workshops for her faculty; introducing life skills education programmes for students; promoting group discussions; developing students’ relationship management skills, and facilitating new technologies-aided education. “The infirmity of school education in India is that it encourages facts accumulation rather than critical thinking and problem solving skills development. Our objective is to effect a gradual transition towards new ways of learning,” says Bir.

Looking ahead, she visualises introduction of new technologies and attracting high quality teachers as R.N. Podar’s major challenges. “Technology is not simply a challenge but also a great binder. By incrementally intensifying technology-aided education, I want to familiarise our students with the real world outside the protective school environment. This will also enable them to become self-learners and reduce the load of teachers, for whom the teaching profession will become attractive again. That’s my strategy to meet these emerging challenges of the new millennium,” says Bir.

Tejal Sudarshan Raut (11), resident of Sonale, a small village (pop. 812) in the Thane district of Maharashtra, had never stepped into the world beyond until a few months ago. But in December she was selected to represent her school run by the Quality Education Support Trust (an NGO promoted by Nilesh and Meena Nimkar), at the National Children’s Science Congress (NCSC) convened by the National Council for Science and Technology Communication, a network of state agencies. NCSC 2008 attracted 500 students from across the country, who presented their science research projects at the congress.

Under the rules of the NCSC competition, the project was presented at the zilla, zonal and state levels before it was accepted for the national science congress held in Nagaland. “Nilesh and I were quite amazed. We thought the best we could do was to qualify for the zonal round,” says Meena.

With the help of basic scientific equipment, the five children studied and recorded patterns of rainfall, wind, temperature and humidity in Sonale. On the basis of their research they concluded that while the monsoon was active over Sonale in the months of June-August, farmers should budget for poor rains in September. Rainwater harvesting and controlled irrigation therefore, is critical for profitable agriculture in Thane district, said their project report.

The road for these first-generation learners was not smooth. “We would place the rain gauges in parts of our village and the next day we would find that they had been thrown away by people thinking they are useless plastic bottles. We had to replace them at least 12-13 times,” says Tejal. Moreover, in Sonale village where 75 percent of the population constitutes illiterate Dalits and OBCs, parental support for the project was nil.

Nevertheless the school team’s utilitarian advice and good show at the NCSC has changed attitudes about the value of education in Sonale and its environs. When the Nimkars started Grameen Bal Bhavan here two years ago, it had few takers. “Thanks to the children winning national recognition for their research project, there’s renewed enthusiasm for primary-secondary education,” says Meena Nimkar, who is already shortlisting projects for next year’s NCSC.

Friends Behind Walls in conversation with Amar Chitra Katha 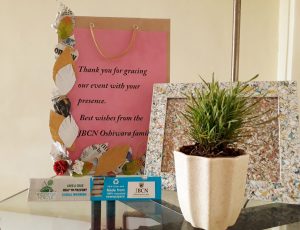